By Friedel on February 27, 2015 in Bicycles, Expat Questions, Shopping

If you live in the Netherlands long enough, and if you have kids, chances are that at some point you’ll consider buying a bakfiets or Dutch-style cargo bike. 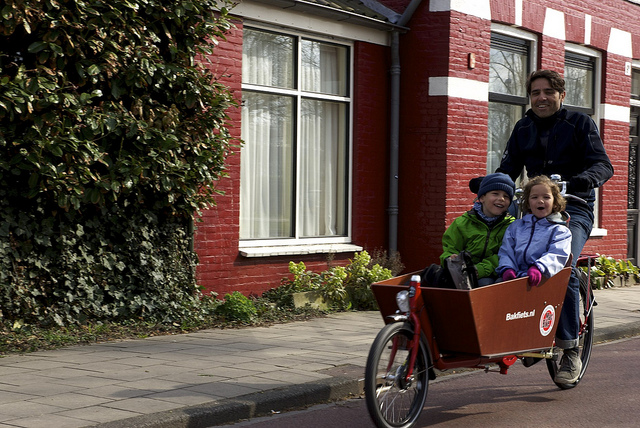 They’re incredibly handy for carting kids and shopping around the city and, for car-free families, they’re an almost essential accessory. Since expats often ask about which bakfiets is the best, or how to choose one, and since many reviews are only available in Dutch, here’s Part 1 of our Buyer’s Guide. The advice below comes from our own knowledge of bicycles (we biked around the world from 2006-2009) and research we did while considering the purchase of a bakfiets ourselves. 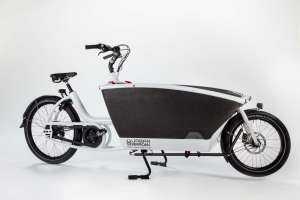 The electric Urban Arrow Family bakfiets has been rated as one of the best.

Electric or not?
Most people we’ve talked to say that, budget permitting, they would prefer a bakfiets with a battery. These are HEAVY bicycles, weighing about 50kg empty. It’s perfectly feasible to pedal one on without electric support on relatively flat paths but you’ll appreciate the extra push of the battery when you’re hauling more than one kid, a lot of shopping or pedalling uphill into a headwind. Battery support also makes it feasible to use your bakfiets over longer distances.

This support comes at an extra cost. Expect to pay €1,000-1,500 above the cost of non-electric models. You’ll probably also need to buy new. Most second-hand bakfietsen advertised on websites like Marktplaats are the non-electric variety.

Of course, it’s perfectly feasible to get a bakfiets without a battery and you’ll be in fantastic shape after a few months of pedalling around town! Just be aware that pedalling an ordinary bakfiets could be a little challenging in certain conditions (headwinds, hills, etc…).

When deciding between two or three wheels your first consideration should be how many kids you want to carry. A two-wheeled bakfiets is slightly smaller and is therefore best for no more than 3 children. Of course, you can always put an extra child in a seat on the back (fixed to the luggage rack). A two-wheeled bakfiets is also easier to handle over longer distances because it tends to be lighter compared to three-wheeled models. Finally, it’s more compact, which makes it easier to park.

Choose a three-wheel model if you think you’ll need to carry 4 or more kids, or if you plan to regularly carry a lot of shopping home. Most people ultimately choose a two-wheeled model.

TIP: If you choose a two-wheeled model, make sure it has a good, easy-to-use kickstand. You’ll need this when loading and unloading the bike.

The Babboe City bakfiets is one of the most affordable models available.

As you research bakfietsen, you’ll notice a wide range of prices. Babboe models start under €1,000 while the electric models of the stylish Urban Arrow bikes sell for over €3,000. What accounts for this?

In Part 2 of this series, we discuss specific models and the pros and cons of each.

Djeco Card Games: Great For Kids and Parents Alike
Swing Gyms For Kids Of All Ages